Abie “Boogaloo” Ames, who died at the age of eighty-one in February of 2002 in Greenville, Mississippi,  was a master of the  boogie-woogie piano style.  Born in rural Georgia, he taught himself to play the piano by listening to songs on the radio and playing with them.  When he was fourteen, his family moved to Detroit, where he played gigs regularly in the 1940’s at local clubs.  He eventually led a popular local band in Detroit.  He also worked as a session player in the Motown Studios when Motown was just beginning. In the 1960’s Boogaloo returned to the South where he still lives today in Greenville.  He began teaching Eden Brent, a young resident of Greenville, in the 1980’s .  They eventually began playing together and continued this partnership which was the focus of a 1999 award-winning documentary by Mississippi Educational Television called Boogaloo and Eden:Sustaining the Sound.

Abie “Boogaloo” Ames was named the 2001 Artist’s Achievement Award Winner of the Governor’s Awards for Excellence in the Arts in the state of Mississippi.  He was also a recipient of a Folk Art Fellowship from the Mississippi Heritage Commission and an Apprenticeship in 1993. He played many blues festivals and was a living library of jazz and blues songs.   His photo appeared in a book called American Music.  He and his partner Eden Brent performed on July 27, 2000 at the Kennedy Center Millennium Stage in Washington, D. C. on Mississippi Day. Eden and Boogaloo play boogie woogie together, photo by Jacobs

His piano playing style earned him his nickname “Boogaloo” in the 1940’s.  The team of Ames and Brent performed not only at Kennedy Center but at the Waldorf Astoria  in New York and the Republican National Convention.  Boogaloo and Eden, a half hour documentary produced before Ames’ death by Mississippi Educational TV, is about the musical and personal relationships between Eden Brent, a thirty-something year old white female, and her teacher and partner, 81 year old Boogaloo Ames.

At the time of his death,  Boogaloo was working on a CD with Mississippi jazz sensation Cassandra Wilson in a Clarksdale recording studio to produce Belly of the Sun, for which Ames wrote a song entitled Darkness in the Delta. 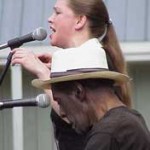