Mississippi drummer Bobby Dale Mann was born in Macon, Mississippi, in 1950.  He moved to Tupelo, MS, in 1971, but now he again lives in Macon.  Mann was in the seventh grade when he played in his first band.  He played with a high school band from West Point, Mississippi, called The Groupe. That band included the Mississippi poet T. R. Hummer. After high school,  Mann played with Johnny Coleman’s Shades, a group from Mississippi State University.  In 1971 in Tupelo, Mann worked for John Mihilic as a studio drummer at Statue Studio.  At night he played with another group.  In Tupelo he recorded demos and masters for a wide variety of artists including Jimmy Gilreath, Gene Simmons, Larry Hobsons, Rusty McDaniels,The County Three, and many artists from the Delta who played mostly soul music and blues music.

Some of the many different groups that Mann played for are J. B. Barrett.  Barrett’s group,  formerly known as Crazy Elephant, recorded Gimie, Gimie Good Lovin,’  which was a hit for him and Fame studio. Mann moved to Nashville, Tennessee, and played for several local groups until he met Troy Shondell (Photo left with Bobby Mann).  Mann then began playing for Troy Shondell and the Shondells.  That group’s biggest hit was This Time We’re Really Breaking Up.  The record sold over three million copies the first year. Troy Shondell is married to Peggy, also a Mississippian, and they now live in south Mississippi.

Mann counts Perry Barker among those who influenced him early on.  Later Steve Smith, Dave Weckl, and Neil Pert were influences.  In addition, traveling with the Shondells gave him a chance to see places he would otherwise not have seen.

For thirty-seven years, Bobby Mann has been married to Peggy Wilkins Mann, and they have three children–all girls.  He is a retired military man and has been a policeman.  Today he still has a room filled with drums and still plays. During the day, he is in charge of 911 for the Macon area.

All Photos Courtesy of Bobby Mann 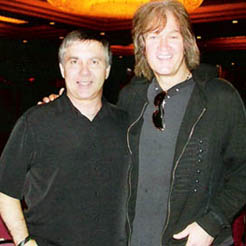 Bobby Mann and his drums Troy Shondell and The Shondells (Bobby Mann on right)