Mack Allen Smith, a musician and novelist, was born in Carroll County, Mississippi, on December 20, 1938 to Malcolm Alonzo Smith and Fannie Mae (Herbert) Smith.  Throughout his early life, Smith lived in a place called “Little Texas”– ten miles from North Carrollton, Mississippi.  He spent most of his time at Lum and Sally’s, which was his grandparents’ house.  Like many musicians of the South, his first musical experience was at church– Hickory Grove Baptist Church.  His first exposure to country music and blues were at his grandparents’ house.  On Saturday nights, Smith could find himself at Lum and Sally’s house, while his mother and her brothers played all the popular country music of that time.  This constant exposure of country and blues allowed him to create his unique style, the “delta sound.”   Shopping in North Carrollton every Saturday afternoon also helped him musically.  On one side of the railroad tracks, he could find white cafes filled with country music.  On the other side, he would hear rhythm and blues played by blacks.

Smith went to grammar school at Carrollton, Mississippi, for first and second grade.  Third grade was completed at Grenada, Mississippi.  From fourth grade until high school graduation day, Smith was schooled back at Carrollton, graduating from J.Z. George High School in 1956.  During his high school career, he was the lead singer for The J.Z. George FFA Band, which won the state FFA Band Championship for 1954-55 and 1955-56.

His first big chance came in 1959.  The band recorded three songs: Kansas City, Mean Woman, and Sandy Lee.  These demos were sent to Earnie Barton at Sun Records.  Unfortunately, Barton had moved to Little Rock, Arkansas, to start his own recording studio, so the demos never made it.  His chance for fame was lost (“Mack Allen Smith,” Rockabilly Hall of Fame).  Nevertheless, he continued to perform at night clubs for about thirty years.  During this time, he also owned his own night club– Mack Allen Smith’s Town and Country Night Club– in Greenwood, Mississippi (“Mack Allen Smith,”Rockabilly Hall of Fame).

Throughout his career, he wrote over 100 songs, and he also produced music for overseas, trying to get a record deal there.  Albums such as Checkmate,Redneck, Charly, Rechita, and Country Groover were sent, but a contract was never signed.  He also tried his music in the United States, but the results were the same.  Perhaps his greatest album was Mack Allen Smith– Live on Halloween recorded on October 31, 1981 (“Mack Allen Smith,” Rockabilly Hall of Fame).

Smith is a great lyricist and also the author of Honky-Tonk Addict which he started in the 1960’s but did not finish until 1993.  It was published in 1996 by Colonial Press (Mack Allen Smith, Interview). Now Mack Allen Smith and his wife, Lois Bennett Smith, live in Greenwood, Mississippi (Honky-Tonk Addict book jacket).  Rumors say that he is still writing music, researching his past.  His second book, Rock-a-Billy Rebel: Known and Unknown Stars I’ve Known, was published in Dec 25, 2012   Today, he is the father of two kids and grandfather to two grandkids (“Mack Allen Smith,” Rockabilly Hall of Fame). 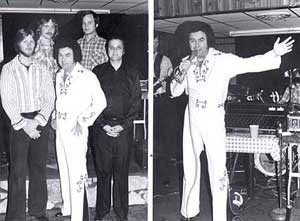 I know Mack mainly as a musician, but I have read his book Honky-Tonk Addict, and it’s a real hoot.  I can certainly identify with what Mack says as he brilliantly describes the ups and downs and wild experiences of a Mississippi musician.  All who have ever been involved with the Southern music scene should read this excellent work.  I have always thought that Mack was one of the most talented songwriters, singers and entertainers to come from a rather large group from the State of Mississippi.  He was just one big break from being a super star.  I’m glad to see that he’s finally getting the recognition he so richly deserves.  My brother-in-law, Sonny Strohm, played saxophone with Mack for awhile. A Review of Honky Tonk Addict Honky-Tonk Addict is an interesting novel written by Mack Allen Smith.  The book shows the hardships and opinions of a great rock-a-billy musician, Mike Sanders.  Throughout the story, Mike faces numerous problems, including not being able to get a music contract to losing members of the band in horrible accidents.  The novel contains many flashbacks to Mike Sanders’ childhood.  The book jumps from winning many “battle of the bands” contests to playing at an annual Columbus Celebration at the University of Mississippi.  At one point, he finds himself at age 55 in a motel room in Mississippi with a twenty-one year old beauty from Ole Miss.  He is well rewarded by his fans, but the few hours of fame he experiences do not make up for the loss of lives he feels when members of his band pass away due to horrible accidents. Honky-Tonk Addict shows the problems faced by many musicians on their road to fame, their disappointments, and their successes.

According to some critics, Honky-Tonk Addict is not a book to be recommended.  A librarian in Greenwood, Mississippi, said, “I took them back.  It’s filth, and we’re not going to have it here.  Another reaction, according to Susie James of the Clarion-Ledger, is that “People say it’s just pornography.”   The book is semi-autobiograhical.

I do not recommend this book because of the material inside it.  Although the author might have been trying to use verisimilitude, the contents are extremely graphic.  The way sex is described in this book is unnecessary.  It is appalling to read about sexual conduct in a book about a musician.  The way the book is set up and the way the scenes were put together are illogical.  A great deal of information in the book is not needed or does not pertain to the story.  For example, the sexual experience he receives can be erased.  The violent deaths and curse words could be censored a little.  Plus, his style of jumping from scene to scene only confuses me more.  The fact that he would be standing in front of a mirror for one second, then off cussing up a storm in the next for no reason really bothered me.  Overall, I would not recommend this book to anyone under the age of eighteen. “What inspired you to write this book?”

“Who is your favorite author?”

Since the 60’s, when I wrote a few song lyrics, and I started the book Honky-Tonk Addict.  I decided to finish the book in 1993.

“I read your book  Honky-Tonk Addict…”

The school let’s you read a book like that?

“I was assigned to write about you for the writers page, but they didn’t force me to read it.”

“What inspired you to become a writer?

I don’t know; I liked writing

“What inspired you to write music?”

“What inspired you to write music?”

Back in 1954, I started writing music and I had a band.  It was called “Mack Allen Smith and the Flames.”

“What instruments do you play?”

I play guitar and sing pretty much all of the time.

“If you could only be one, a musician or writer, what would you be?”

I would be a musician.