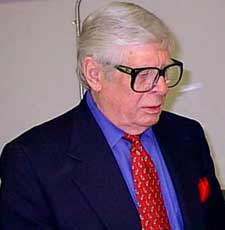 Mundell Lowe is an accomplished jazz guitarist and composer.   In fact, he is considered one of the best jazz guitarists in the world.  Born in Laurel, Mississippi, in April of 1922, he  has worked with many bands ever since the time he was very young.  Having worked with many great jazz musicians and vocalists and composed for both television and movies,  Lowe has become a well-known artist.  According to The Guinness Encyclopedia of Popular Music, his cool guitar style has become a key influence on the frontier of jazz (2571).

Mundell Lowe began playing guitar at the age of six under the instruction of this father who was a Baptist minister.  At the age of thirteen, Lowe left home and found his way to New Orleans, Louisiana, where he played in various clubs on Bourbon Street.  He was soon tracked down by his father and taken home again.   Soon after his attempted career in New Orleans, he headed for Nashville to play in the PeeWee King band, but he was once again his father found him and took him home.

Lowe graduated in 1940, and began playing with the Jan Savitt band (Guinness 2571). Drafted for military service, Lowe met John Hammond Jr. who helped him to establish his musical career after the war by introducing him to Ray McKinley of the Glenn Miller band (Guinness 2571).  Lowe played with McKinley for a year and a half after the war.  Later he moved to New York where he performed in places such as the New York Cafe’ Society, Village Vanguard, and The Embers (Brewer). Lowe also held recording sessions with some fine jazz musicians including Lester Young, Buck Clayton, Charlie Parker, and Billie Holiday (Guinness 2571).

From the early fifties until the mid-sixties, Lowe worked as a musical arranger at NBC for television shows such as “A Date In Manhattan” and the “Today Show.”  Mundell was also  active in both the NBC and CBS orchestras where he met and played with pianist Hank Jones (W.C. Handy Music Festival 1997).  Despite his busy schedule, Lowe also found time to record with Georgie Auld, Ruby Braff, Ben Webster, Carmen McRay, and Harold Ashby (Guinness 2571).

After working for seventeen years at  NBC Lowe was transferred to the News and Special Events Department as a composer.  In December of 1965, Lowe was visiting some of his friends in Los Angeles when he met Jackie Cooper, who  was the head of Screen Gems.  He offered Lowe a job composing music for television and film who accepted and never returned to New York.  During this period, he had a chance to work with vocalists Sarah Vaughan and Carmen McRae (W.C. Handy Music Festival 1997).

In the years preceding the eighties, Lowe made special appearances with Peggy Lee at the White House, toured Japan with Benny Carter, and played at the Monterey Jazz Festival.  Despite all of these events, Lowe became frustrated because he found that he was spending more time writing music than performing. As a result, during the eighties Lowe began to perform in concert and on television once again (Brewer).  From 1981, through 1986, he served as director of the Monterey Jazz Festival hoping to devote even more time on performing live (Bio: Mundell Lowe).  Also, in the early eighties Lowe joined a band named Transit West who made their first major debut at the festival in 1983.  In this band, Lowe played along side Sam Most, Monty Budwig, and Nick Ceroli (Guinness 2571).  Lowe has since worked with his own quintet, the Andre’ Previn Jazz Trio, Kiri Te Kanawa, Tete Montoliu, and The Jazz Alliance (Bio: Mundell Lowe).

1.  Who were some of your main musical influences as a boy?

“I grew up in country music.  Later, Charlie Christian and Art Tatum.”

2.  How has Mississippi influenced your music or career?

“Growing up in Mississippi gave me a sense of good country music on which a lot of jazz is based.”

3.  How heavily have you studied music theory?  How much has it influenced your style?  How old were you when you became
interested in theory, if at all?

4.  Do you have any other hobbies besides playing guitar and composing music?

“I do not have other hobbies.  Music is my only hobby and my livelihood.”

5.  Are you working on any current projects?

“At the moment, I am working at trying to understand and use music programs on the computer.”

6.  What do you think of the latest trend in popular music with rap and R&B topping the charts while classical guitar and guitar rock seem to be dying in the mainstream environment?

“You must understand that Rap and R & B (so called music) were created to make money.  They have nothing
to do with art.”

7.  Of all of your works, what is your favorite album or song?  Why?

“I do not have one favorite album or song.  I try to create something better each time I work.”

8.  You left home at a very young age to start your musical career in New Orleans.  What was this experience like?

“I did leave home when I was young.  I do not advise this.  Try to get all the education possible before you start your professional life.”

9.  What future projects do you have in mind?

“For some time now I have been working on a twelve-tone piece.  I keep trying to write better music each time
I work.”

10. Is there anybody in particular that you’d like to work with in the future?

“I would like to play with the best musicians in the world.  That way I could learn something.” Review of Satan In High Heels

Mundell Lowe got the opportunity to be in the spotlight as a film composer when he was chosen to arrange the music for the 1962 movie Satan In High Heels.  The soundtrack contains the clever brass work that gives a kind of sleazy feel that compliments the themes of the movie which deal with drugs, sex, and crime.  It also contains upbeat, bright pieces as well, reminiscent of the big band era in which Lowe takes advantage of a wide range of instruments including trumpets, trombones, french horns, alto saxophones, flutes, clarinets, a piano, guitars, bass guitars, and drums.  In all fairness, I’m not much of a jazz critic.  The style deviates from my normal taste in music, but this CD contains an enjoyable arrangement of musical pieces that proves Lowe to be a master of creating moods with musical instruments.