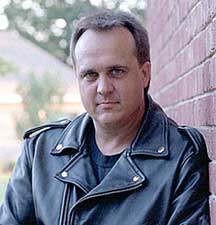 Rick Guy was born in 1959 in Bogalusa, Louisiana. He was adopted when he was six months old. His parents were Richard and Alla Guy. He is an only child (Guy). During his childhood, he was interested in disc jockeying. He continued that interest throughout college working at ten different stations. Among many other things, he was also interested in amateur astronomy, short-wave radios and computers (“Kuklos“). He attended Bogalusa High School and graduated in 1977. He first attended Louisiana Tech University and then transferred to Southeastern Louisiana University where he graduated in 1982 with a BA in communications (radio and television). During college he discovered photography and began working for the yearbook and school newspaper. When he graduated college, he began working for the Bogalusa Daily News. After that he went to Monroe, Louisiana and then Shreveport, Louisiana. Finally he ended up in his present job, a photojournalist for the Clarion-Ledger in Jackson, Mississippi. Guy is an award winning photojournalist. His credits include Newsweek, Time, and People (“Kuklos”). Guy likes his job very much because he gets to meet a lot of different people. He has also done a lot of interesting things on the job such as landing on an aircraft carrier in a helicopter to riding with the president in his motorcade. He has gotten to cover movie stars and other important people. In addition, he also has met several famous writers such as Eudora Welty, Margaret Walker Alexander, John Grisham, Thomas Harris, Nevada Barr, Charles Wilson, Ann Rice, Rick Bragg, and Stephen King. He will continue to be a photojournalist, unless his books sell a lot or he is offered a movie contract (Guy).

Guy has always written. Besides having a passion for writing he also loves motorcycling. (“Kuklos“). He has never had any accidents on the street, but has had a couple racing (Guy 3). He was inspired to writing his own novel after reading John Grisham’s The Firm. The first book he wrote was Airwaves (Guy 1). It takes place in New Orleans and is about a disc jockey who hears a murder while listening to a cell phone conversation on a police scanner. This novel includes murder, the FBI, and the Secret Service. It took him seven months to write. Unfortunately it was rejected by publishing companies. Two years later he wrote Kuklos, another mystery novel which includes the secrets of the deep, dark South. It takes place in Mississippi and displays the corruptness and hatred of the governor and his pawns (Guy). This novel delivers a first rate thriller that keeps the reader guessing until the last bullet hits its mark (Fraiser). It was published by Graystone Publishing in 2000. He has now finished and revised Airwaves, which has been accepted for publication and will be released in October, 2001. He is currently working on his third novel Katana. This novel is about a terrorist group trying steal a nuclear bomb (Guy). He currently resides in Brandon, Mississippi. He is married and has a family.

Rick Guy continues to be an award-winning photojournalist. He currently has his own photography business and works for the Clarion-Ledger in Jackson, Mississippi. His novel Airwaves was published in 2004. He and attorney and Mississippi writer Jim Frasier have published two books together (The Majesty of Eastern Mississippi Coast in 2004 and The Vanished Mississippi Gulf Coast in 2006) with Rick Guy doing the photography for both books.

A Review of Kuklos

Kuklos is an intriguing and mysterious novel by Rick Guy. Guy captures the reader with his action and mystery. This page-turner will keep you on the edge until the very last page. Jim Fraiser of the Clarion-Ledger said in his review of this first published work of Guy’s that “Guy’s Kuklos is one novel that delivers a believable story of political corruptness.”

Kuklos is about a journalist, Alan Scott, who keeps discovering the deep, dark secrets of the Mississippi government. One conspiracy to the next sets up the stage for murder and lies. All of the powerful figures of Mississippi that commit these horrendous crimes are a part of the Ku Klux Klan. Rick Guy succeeds in offering significant and insightful glimpses into the type of political back-room dealings that go all the way to the top, and he peoples his story with realistic characters that think, speak, and act just like the folks we encounter in our everyday lives.

Guy portrays the wicked acts of corruptness yet underneath there is a  layer of Southern pride and heritage. He gives all of the characters their own role leading up to the climax. His  unique style won’t even let you suspect that he is a novice writer. He depicts the corruptness and power of the Ku Klux Klan and  leaves the reader wondering about the world we live in.

I like this book a lot. If you’re interested in the secrets of the South such as the KKK and its activities, this novel is a very realistic book. It talks about the actual murders of the civil rights workers that were killed in Mississippi in the sixties and the  brings these events to life.. Rick Guy  leaves the reader questioning the why of such human behavior.. Though he doesn’t dwell on one point too long, he does explain it thoroughly and makes the plot very realistic.

The setting of the book is different parts of Mississippi. Guy  brings the setting to you visually by describing it  accurately. I am from Mississippi and can relate the geography of it. He gives Mississippi a good name and frees it from its stereotypes.  In this novel, the KKK’s Grand Titan is governor of Mississippi and is now running for the presidential election. He is backed by other politically-powerful klansmen. Now two decades later, their secret is somewhat discovered by a submerged car being pulled up out of the water. The car’s appearance leads to evidence of their real backgrounds, including the governor’s. This finding of this  car could put a lot of people holding political positions in jail, so they do everything in their power to eliminate the evidence, including  murder. Alan Scott, a struggling journalist decides to do a trivial story on the sunken car, which turns out to be the key to unlocking the corruptness of one of the most powerful men in Mississippi. With different clues he begins to question the innocence of the government, and in so doing Scott uncovers one of the most terrifying secrets–the real horrors associated with the KKK and these powerful men.  Scott’s life is on the line for two reasons.  The men he has uncovered secrets about want rid of him, and he is the number one suspect for a murder he did not commit.

I think this book is definitely worth reading. If you like the secrets of the South and enjoy a good mystery, this is a good book for you. It can be enjoyed by all types of people. I recommend you read it and find out what happens to Scott and what happens with the dark secrets of the KKK. As I said before, Airwaves takes place in New Orleans and the main character is a disc jockey at a radio station (I worked as a disc jockey when I was in high school and college) who hears a murder while listening to a cell phone conversation on a modified police scanner. Through this, he becomes involved with a plot to kill the president. It involves motorcycles–no surprise there, huh?- and airplanes and a lot of FBI and Secret Service stuff.