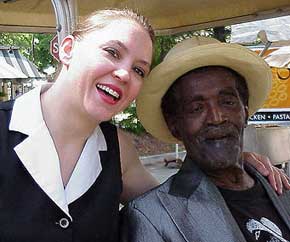 Eden Brent, a Mississippi musician, is on fire.  Brent didn’t know when she began playing the piano that she would earn the name ” Little Boogaloo,”  but the music that Eden Brent plays is now loved by many Mississippians and is well respected. She carries on the musical tradition of Abie “Boogaloo” Ames.  She  is a beautiful, talented, and hardworking woman on the rise.

On November 16, 1965, Eden Brent was born in Greenville, Mississippi, to her parents Howard and Carole Brent. Brent has two sisters and one brother named  Jessica, Lincoln, and Bronynne Brent.  Around 1969, the piano became a toy to Eden Brent because growing up and living out in the country, Brent didn’t have many playmates.  As she got older, Brent was realizing that playing the piano was  what made  her happy (Brent)

In 1970 Brent started  kindergarten at First Methodist in Greenville, Mississippi.  She first met Boogaloo Ames in 1981.  In 1983 Brent graduated from Washington High School  Because she wanted to take her music playing to a higher level, Brent enrolled in a music college in Texas where she learned how to play the piano very well (Brent).  What she didn’t know was that she had more to learn about playing the piano. In 1985 Eden Brent’s life was changed.  This was the year that Brent started taking lessons from Abie “Boogaloo” Ames, a black blues and boogie woogie piano who also lived in Greenville.   Brent discovered  that she had entered the best stage of her life.  She started to learn styles that nobody else had.  Brent fell in love with Boogaloo’s style of playing;  and Ames became more than a teacher, he was now her mentor.  During her period of learning, Brent  would sing on stage with Boogaloo when he performed in different places (Brent).

In 1990, they really became a coalition. In 1999, the two were featured in Sustaining the Sound, an award winning documentary produced by Mississippi Educational Television (Mississippi Arts Commission).  In July, 2000, they performed at the Kennedy Center (Clarion Ledger).  In 2001 they were the final act for  the Cotton District Arts Festival (Starkville Daily News).  Brent and Ames would performed  at the Gertrude C. Ford Academic Complex Recital Hall on Millsaps Campus, Jackson, Mississippi,  on February 8, 2001 (Clarion Ledger). Abie “Boogaloo” Ames became ill  and died on February 5, 2002,   Eden Brent took care of Ames throughout  his sickness.  Brent will remember him for his smile as well as his music (Clarion Ledger).  Her plans were put on hold during Ames’s illness, but she is again busy performing in many different areas in Mississippi.  She also plans to pursue the publishing/printing of  Boogaloo’s CD, establish the Boogaloo Memorial Scholarship Fund, and start on her own recording.   She’s always wanted to play on the Gulf Coast, and she also wants to play in New Orleans (Brent) She is a talented Mississippi musician who will go far.

In 2003, Brent released her first CD Something Cool. Her newest album is Mississippi Number One on Yellow Dog Records. A tribute to Eden’s home on Mississippi State Highway 1, it features her own Memphis-style “He’ll Do the Same Thing To You,” urban soul “Afraid to Let Go,” gospel endeavor “Until I Die” and the blues classic “Trouble in Mind.” The album is dedicated to her mother, the late Carole Brent, and was released nationwide on April 15, 2008. In 2005 Brent was the Mississippi Delta Blues Challenge Winner (Mississippi Delta Blues Society) and in 2006 she was the International Blues Challenge Winner (Blues Foundation).

What were your parents’ names?

“My parents’  names are Howard and Carole Brent.”

Do you have any brothers and sisters?

“Yes, I have two sisters and one brother by the names of  Jessica, Lincoln, and Bronwynne Brent.”

When was your first experience of playing the piano?

“When I was about four, I used to fiddle around on the piano.”

Where did you attend kindergarten?

“I attended First Methodist for kindergarten.”

Where did you attend the rest of you school grades?

“I attended Washington School,  and I have always had piano lessons since I was in grade school.”

Where did you attend college? “I attended a music college in Texas.”

When did you first meet your mentor Abie “Boogaloo” Ames?

“Charles, his style is so distinctive, and I wanted to learn that style so I could carry it on through the future.”

Who taught you what you know about playing a piano?

“I learned how to play during the lessons I took in grade school and college; however, I learned to play by Boogaloo and all of my styles come from him.“

How did you start performing with Boogaloo?

“Charles, when he would go somewhere to perform, I would go to watch him perform. After he performed for awhile,  he would call me up to sing a couple of songs.”

When did you guys start to perform together? Eden Brent by Justin Fox Burks. Courtesy of the photographer

“Around 1990, we started to perform all over.  Around 1993, we applied for a Folk Arts Commission grant. I actually filed the grant.

What happened during the grant period?

“Boogaloo was paid to teach me to play the piano.  I feel that I learned much more about playing the piano in those three months than I could learn in one year.”

What did you consider Boogaloo besides as your teacher?

“He was much more than a teacher; he was a real close friend; and it wasn’t all about playing and performing together.”

What were your feelings while taking care of Boogaloo when he was sick?

“It was very sad while taking care of him because I hated the fact he could not do the things that he enjoyed the most.”

What are your favorite memories about Boogaloo?

“Performing at the Kennedy Center is a favorite memory for performances.  I love the memories that we had while traveling together.”

When does Cassandra Wilson’s album drop?

“The album should be in stores this month, April.  I am really not on the CD I just drove Boogaloo to the sessions and listened to them perform.”

What is your advice to children today?

“My advice to children today is to be good to yourself and work hard to accomplish what you want in life.  Also, work at what you enjoy and once doing something enjoyable it does not seem like work anymore.”

What is your advice to younger people that want to make it in the music industry?

“I think that you should play as much as you can.  The biggest thing that you don’t want to do is get frustrated.  Learn by listening to people you enjoy and learn from what you hear.  Eventually, you’ll develop your own style.” “Answering the telephone, listening to new music, learning more techniques of playing the piano, and practicing.”

What’s the name of your group that you have developed?

“We really don’t have a group name.  It can just be called Eden Brent’s Band.  There’s about five or six people in the group.”

What are your goals that you want to reach in life?

“I want to print Boogaloo’s CD, establish Boogaloo’s Memorial Scholarship Fund, and start on my own recording.   I had planned to start recording my record, but at the time Boogaloo passed away,  and I had to cancel my studio sessions.”

What events do you have coming up in the year of 2002?